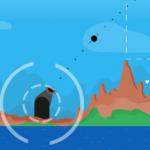 On the DEF island, you are the only general who can stop the attack of the other enemies. There are plenty of enemies who want to occupy your island. They are approaching closer and closer. Can you stop them by destroying their boats and airplanes? You can use the huge cannon from Friv free games to show your power and capacity in a real battle on the sea.

Since these enemies will not stop, you need to predict their position and defeat them. Aim precisely as soon as they appear on the screen and shoot to burn down both the boats and airplanes. Keep in mind that the closer they get, the harder it is to shoot at them. Not only will the game test your ability to aim and use the cannon but you will also learn some tips on how to read the battlefield to make the best judgment. At http://frivclassic.net/, there are a lot of elements which needs to be taken into account.

You also need to be persistent to endure the intense battle. Don't hesitate to aim again if you fail to destroy the enemies at the first trial. Practice makes perfect! Hope you can guard your island only using a cannon. For more games with the same category, don't forget to check out Paint Hit and Jump Ball Blast Online. Your score will be shown on the top of the screen as well.

Use the left mouse to change the circle to aim at the ships or touch within the dotted area to shoot at the aircraft.