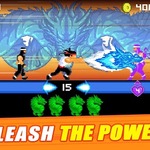 Kung Fu Fight: Beat 'Em Up is an awesome fighter game which you can play on friv games online for free. In this game, you turn into a Kung Fu master and you are in your peaceful temple, but a group of the bad guys appear and attack you. You must make full use of the strength and fighting skills to slay the enemies and protect your house.

You start with the first level which requires you to kill 18 opponents. Kick and punch them to attack them. They appear from 2 sides, so you must pay the highest attention to hit them. Try to slay them before they have a chance to assault you. In the beginning, they appear one by one but after a while, a group of ninjas comes in to hit you at the same time. They are also strong but I believe that your fighting skills can knock them down in friv games for kids.

You can see your health bar on the middle of the screen. It reduces a little bit when you get hurt and you will lose your life as it runs out. Each level asks you to kill a certain number of foes such as you have to kill 18 opponents in level 1, 25 opponents in level 2 or 21 in level 3. Slaying the bad people brings coins to you, you can use these coins to upgrade and unlock new weapons and skills.

You can gain 3 stars if you aren’t injured during the match. Try to gain 3 stars in each level and unlock as many levels as you can to be the strongest Kung Fu master.

Your feedback and rating are always welcomed. Introduce the game with your buddies to have fun in the free time. Why don’t you try out other interesting games like Wild West: Sheriff Rage and Weapon at http://frivclassic.net/.