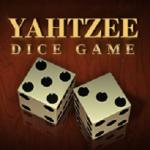 Yahtzee, the new dice game for kids at Friv land 2019 will create a genius platform which allows up to four players to emerge in the thrill of rolling the dices. Not only can you play alongside your friends but you can also make new friends since your competitors are from all kinds of countries all over the globe! Or choose a private server and tackle the puzzles on your own to de-stress after a hard working day.

The goal in this game is to gain the best score per turn. Each player will take his or her turn and roll your five dice three times. After each turn, the mechanism of the game will record how many scores you earn and list them on the column. Do your best so as to earn as many points as possible using the best combinations of numbers.

The column on the left side of your screen lists the dice numbers as shown on the table. There are three prominent criteria that you should pay extra attention to, which are Subtotal score, Bonus and Upper Section Total. The other sections resemble that in Poker game, so you might have already been familiar with Full house, Flush, Straight three and so on.

The best players shall be the ones to fill each and every column of the score sheet first. It's one of the most popular board games here at http://frivclassic.net/, alongside with other good choices like Planets Jigsaw Challenge and Pyramid Mountains

Use the mouse cursor to choose and roll the dices.