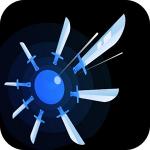 In Knife Blades.io, the new game with the io gameplay mode for kids, you will need optimum speed in moving, attacking and gathering the blades on the large map. It's one of the highlight games that Friv brings to the new collection with a distinctive set of features. Since this is a classic io game, the main elements and the graphics resemble the theme of some famous io choices that you might have tried before.

However, prepare to update to the trendy knife skin, buy tons of sharp blades from the store and unlock new versions of weapons in this game! Your job is to dominate the map by making your character the most powerful owner of knives. Move around the area with lots of blades first to gather them up.

Once you feel like your knives are enough for battles, be brave and approach the seizable enemies for a fight off. If you manage to win, tons of blades and bonuses will absorb to your power. But steer clear from the bigger enemies since they will chop you into pieces at once! Moreover, after a while, the map will automatically narrow down to make the game much more challenging since there is no other place to run.

Only one player can be the last knives master of this game at http://frivclassic.net/. More cool io games are available for you such as Farmers.io and Kize.io. Enjoy all of them now!

Drag and click the mouse to move and defense.