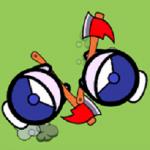 Kize .io at friv free Games online is an incredibly addictive fighting game. You can completely challenge yourself in this free online game. At the beginning of the game, you will appear in a beautiful 3D animated simulation land. And your task in this game is to control your character holding the weapon that the game has given to be able to fight with opponents around the world. Enter a vast field full of evil and competitive players from everywhere.

Try to be the last one standing. Are you ready? Use your ax to cut and fight your opponents. But one thing to note is that your competitors are extremely crowded and they are ready to be able to compete. So the person you can fight to win in this game is not that simple. It requires you to have the observation and real agility in combat.

React quickly when meeting opponents to be able to destroy them in the shortest possible time. The more enemies you kill, the higher your score will be and will use that money to upgrade your weapons and various useful items to grab and use to survive.

Fight and experience the great things that the game Kize .io at http://frivclassic.net/ gives you. Remember to share the joys you have from the game with your friends and invite your friends to join the game now to be able to fight with the most attractive ax weapon. Why don't you challenge yourself to get involved in some similar game genres like Knife.io and Farmers.io.

Use the mouse to shoot