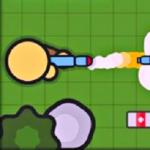 In Zone Royale, Friv land brings you to the realm where multiplayer are competing to claim their own piece of land. This online IO game is packed with players and different kinds of weapons scattered on the ground. Since it's an IO game, the players are required to move around constantly while avoiding the larger enemies.

The rule is the bigger player can defeat the smaller ones, therefore, it's crucial that you keep this in mind to survive. The goal is to shoot around like a maniac so as to dominate all the pieces of land. After spawning on a field full of other players, make sure that all of your surrounding enemies are defeated. Don't stand around for too long without attacking since doing so will turn you into an easy target.

The winner will be the last player standing. Or you can try to kill as many opponents as you can and set the highest record on the board. There is another unique feature in the game at http://frivclassic.net/. that will make it harder to win. The borders of the map will start shrinking slowly until you end up dead on the red zone.

This means that not only do you have to move around constantly but you also need to avoid any danger zone. After conquering this battle, start off the new journey with other io games like Drednot .io and Agar.Wtf

aim, move and shoot using the mouse, Q key to change the weapon, F to drop the weapon and W to boost speed.