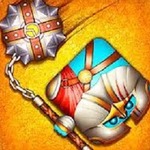 Booms.io is a fantastic multiplayer io game which you can play on friv kid games for free. Come to the game, you have a chance to compete with various gamers coming from the different countries. Each of you possesses a flail which is used as the weapon to attack enemies as well as defend yourself.

You are allowed to choose your character, name him, and decorate him. There are many colors for you to select such as pink, red, blue, yellow, green, and so on. After that, decorate them with the different patterns and accessories. Furthermore, the game features many types of weapons but only the basic mace is available for you to play for free and you have to gain an amount of money to unlock. For example, you have to earn 15000 coins to unlock the “dark lord set death star” or “dark lord set life star” and the “pygmy set rhundu” costs 30000 coins in friv games for school.

Don’t forget to collect the colored food particles which are scattered on the ground. This food is moving constantly around the arena and it can help you grow your weapon. Thus, you can inflict more damage and gain a tactical advantage over your opponents. Furthermore, after you slay your opponents, these killed enemies turn into food and you should collect them all. In addition, try to avoid being attacked by your foes or you will die immediately. Dodge the others obstacles such as the moving objects with thorns to stay alive.

Can you dominate this rich land? We are so thankful to receive your assessment and feedback. Tell your buddies about this game and invite them to take part in the largest arena in the world. Play more with CatMouse.io and Anark.io at http://frivclassic.net/.

Use your mouse to move your character and click the left mouse button or spacebar to throw the weapon.