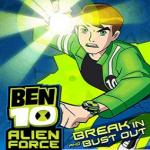 Ben 10 Alien Force: Break In And Bust Out

In this new adventure to fight off the new breed of alien, Ben 10 needs your help to conquer the missions in Ben 10 Alien Force: Break In And Bust Out! The world of Friv land is in crisis from the invasion of aliens, and it's time to save Gwen from this scary breed. Your job is to reach the dark fortress in another dimension, take down the walls and fight the guards through all levels.

It's not going to be easy to penetrate these impressive fortress walls, but your character can shape-shift and use the special item called the Omnitrix. Using the Omnitrix, Ben can shoot many balls of energized plasma at those fortress walls to turn them into bricks! Keep the balls running and make sure that you don't run out of ammo.

This is the first mission on the board, so prepare yourself for even harder challenges coming up soon! While fighting off the aliens, you can flexibly transform into the other characters such as the Echo Echo, Big Chill, Spidermonkey, and Swampfire to take advantage of their powers. The more forms you can take, the higher the chances you have to defeat all the enemies.

The possibilities are endless in this game at http://frivclassic.net/, so be creative! Enjoy other excellent graphics in games like Ben 10 Jumping Challenge later for your entertainment!