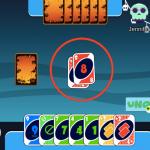 Have you got any fun game to enjoy with your groups of friends in the Halloween season? Why don't you check out the UNO card deck with the special Halloween theme from Friv kid games? Gather some friends and have a blast with this hilarious game!

This is one of the most popular games for decades that is famous for its complexity and requirement for quick reaction. The rules of the online version are the same as that of the original game in real life. The players will take the turn in a circle to take out their cards. The next card needs to have the same number or the same color as the previous one. If your deck runs out of cards with these criteria, you will have to draw two new cards from the base deck.

Can you be the first one to push all of your cards away in this game at friv Games for kids online? It's all about concentration and reflex to draw out your card as soon as possible. There will be some special cards that you should pay attention to such as the reverse card, the 4+ card and many more. Use them wisely to trap your friends and gain the upper hand! Another important note is to press the UNO button when your deck has only one card left.

Should you forget about it, the other players will attack you. It's a fast-paced game with a specialized Halloween-themed card deck for the season. Defeat more competitors with other card games like Giant's Island and Pixel Art 3d online!

Controls: Use the mouse to move the cards.