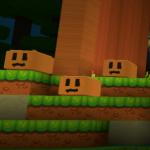 There is no overlap among 3D action-themed games from Friv land since each has its own rules with distinctive gameplay. Join a recently added game in this category called Giant's Island to have another fun session with the elaborate Minecraft game art animation! The detail in art animation of this game is one of the highlight points that you should look forward to.

The players will be pushed down the island filled with dangerous giants. As you need to fulfill the task assigned by the captain, do your best to find the treasure hidden in this place. Surviving the dangerous jungle, land and water parts while fighting against the giants will be tough, but with proper skills, you can enjoy the thrilling sensation of this adventure at friv kids.

Moreover, the more chests of treasure that you can find, the more chances for you to make a lot of money. After all, this game comes down to finding the most money. Your character has its fire gun which can be used to defend against the opponent's or giants' attacks. it's up to you to decide to either run or fight. Use it wisely and timely to avoid being noticed.

Like any other game with the pixelated graphics, you should search the ground carefully to bring home some useful items. Don't let your energy level run out! Spend time exploring more cool worlds at other games like Zombain.io and Blocky Farm later.

Use WASD to move, Left Mouse to fire and use the items.