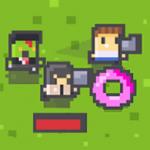 Die or survive, it’s all up to your shooting skills and fighting strategies in one of the most exciting multiplayer IO games called Zombain.io. Be ready to deal with the upcoming dangers. You not only face hordes of zombies but also other real players. They are trying to kill you. And to survive, you have to kill them first at Friv online games for free. 30 players gather in a large map filled with zombies.

Zombies automatically come to you. You don’t have to search for them. Once you are on the battlefield, you start fighting, collecting donuts and trying to kill as many zombies and enemies as you can. Your points in each match depending on how many donuts you get, zombies and other players you kill. You need these points to level up and unlock new characters.

If you get shot, your health reduces and you can recover your health by collecting blood items on the map. You also get weapons which help you increase shooting performance. If the zombies are too crowded, you should run away. Especially, zombies and other players come to you at the same time on http://frivclassic.net/. You can not deal with all of them at once.

Just move to stay away from them. Make a safe distance between you and zombies and other players. The match ends when there is only one player still alive. Are you able to become the winner? Check it out! Explore other fun games on our site such as Drednot .io and Zone Royale

Move with your mouse and shoot with your left click.