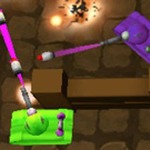 Tank Heroes: Fight of Flight is an epic frivgame of military warfare with tanks! The aim of the game is simple - you must move around each level and destroy the enemy tanks using your own cannons! Your tank only has three health points so you must be very careful and try to evade enemy fire at all times. Also watch out as the tank shells can bounce off of walls and still damage you!

Move with purpose and watch out for your enemies position - try to take them out strategically and use the walls to your advantage for both cover, and to bounce your shells off of! At the end of each level you gain a star rating and a score based on how well you perform. Can you complete every level and reign as the tank champion?

Tank Heroes is a fighting game. Use the W A S D keys to move your tank and tap to shoot the opponent tank. There are five levels in the online friv game. Can you be the tank hero in all levels? Enjoy the game.

Check out some similar games like Mexico Rex and Zombie Incursion at http://frivclassic.net

Tank Heroes: Fight or Flight is a web browser game.