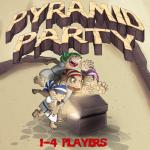 Maximum of four players can play simultaneously on the same screen at the same time. (CPU mode is available) It's not because you're held captive in a massive pyramid something which you shouldn't be looking for a way to make ends meet! Take control of a comparatively tiny Egyptian brimming with greed and dash to the pyramid's riches. In this exhilarating party game at Friv classic, you can play against artificial intelligences or against a friend. Much fun!

In addition, we also update tons of new games for you to explore such as The Home of Pleia. Expanding the list of online games today.

To keep moving your character and reach the treasure chest, use the on-screen joysticks. Earn more treasures, be faster and smarter than your friends, and become the ultimate pyramid king!