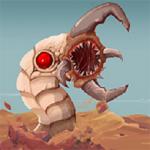 Let's go on an underground rampage in Deep Worm at Friv free games! It's not an ordinary simulation game. This time, you will play the role of the public enemy. As you move your own giant deep worm, there will be plenty of soldiers who are waiting for a chance to shoot at your character and blow a hole in it! Will you be smart enough to take advantage of the underground world?

Your worm will move constantly, so the only element that you can control is the moving directions. Choose to move to the right or the left of it and target the soldiers on the ground. By popping up and down randomly and unexpectedly, your worm will get the upper hand and can win this new side-scrolling rampage game in no time.

Aim at the moving soldiers to find the right emerging spot. Keep in mind that the soldiers at the back will start shooting at your worm if they see it, therefore, we recommend that you start eliminating the ones at the end of the lines first. For each bullet shot at you, your worm length will decrease.

Moving around and making a mess underground will be extremely fun thanks to the freedom that you can experience at http://frivclassic.net/! When your energy is full, use the extra turbo for more damage! Other good games from this category are Elf Defense and Rolling City, check them out to have fun later with your friends.