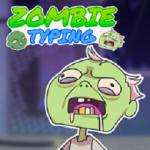 If you are learning to type on the keyboard fast, don't miss out on Zombie Typing, a new and fun way to learn while enjoying the thrill of a good game from Friv land. This is one of the challenging typing game where you must try to type fast to win. The twist is that it takes the form of a zombie game! The zombies will attack in waves. Each of the zombies has its own word attached to it. In order to kill as many undead as possible, don't let them touch you. How can you do that?

Just type the word on the zombies and the character will shoot at them automatically. There is no time limit, but you still have to kill them before they get to you and eat your brains! While typing down the words to shoot your gun, as long as you don't panic, you can start increasing your finger speeds and skills. If you have gotten used to the gameplay at http://frivclassic.net/, the speed of the waves will increase significantly to pose more challenges from the zombies. They will try to reach you faster to devour your fat, juicy brain.

Don't freak out and start off with the closest zombie to the next ones to clear off the path. Your character has a bar of energy shown on top of the game screen. Whenever a zombie hits him, the energy will decrease a little bit. If it runs out, the game will be over immediately. Learn the techniques and show your speeds with more games like Goblin Killer and One Hand Cowboy as well!

Use the keyboard to type the word and interact using the left mouse.