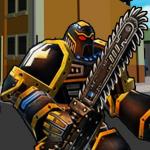 A new choice for robot lovers has been added to the collection at Friv boy games. It's the kind of game where the players get to interact with different genres of tasks. Each player gets his or her own robot whose movement can be controlled.

To claim the victory through every level, the players have to control the robot so as to complete all the exciting yet dangerous tasks. Since the tasks occur at many different locations throughout the map, utilize the special feature which allows it to fly over the city with a jet pack and scout the ground for any strange signal.

Also, when you find the required task, it's crucial that you finished the task in certain minutes as there will be a time limit. For example, the time limit is 1min for defeating 5 enemies surrounding the robot. Sometimes, the mission will not be fighting but searching and locating instead. Based on the variety of tasks that can be found in this game at http://frivclassic.net/, the players can experience and develop more types of skills for fighting.

Also, you can look forward to a realistic setting with different layers of the layout to emphasize the users' experience. Become the hero of the city with the power of your best robot now! Don't forget that we have tons of other robot games like Cyber Rage Retribution and One Hand Cowboy here as well!