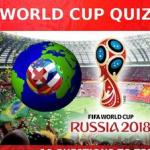 World Cup Quiz is an online sports game which you can play on friv best games for free. Do you like football and are you a World Cup soccer fan? How do you know about the most famous football competition in the world? Let’s take part in this test game to see if you really know the football cup?

The 2018 World Cup has already started but can you remember what happens in the previous World Cup and the most attractions in the World Cup from the beginning. The game contains various questions related to this event such as the champion, the runner-ups, the location of World Cup, the number of times getting victories of a team, the name of the best player in a certain field and so on in friv sports games.

For instance, there are many questions like Who was the oldest goal scorer, which is the team who has won more than one world cup, who won the most world cups (5 times), which player has shot the most goals in one world cup, and so on. We prepare you totally 20 questions to deal with.

In each question, there are 4 answers below and you have to click on the one which you think right. There are 2 numbers on the bottom of the screen, one of them show the times you give the right choices and the other one express the wrong choices. Attempt to finish the game with the highest score.

If you are keen on this type of game, please rate it 5 stars and write your comments to encourage us. Share the game with your friends to have fun and explore more interesting games like Penalty Challenge and Platformer Mixtape 2010 at http://frivclassic.net/.