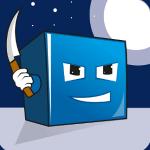 Knifez.io is a new smash hit .io game that you can play here on friv wonderful games for free. You are a cartoon character with a deadly sharp throwing knife. Your mission is to to become the the leader of the game. Get to the first place by obtaining points. Fight a number of other online players to see who the best knife thrower across the land is.

The points are obtained by collecting the colored points that are on the map. Here at www.friv games, there're 2 ways to get points. First, you will collect color dots spread over the map. It's safe, but slow way. Or else the funniest way is to attack the other players to steal their points, but it is also the most dangerous. The other players will throw their blades at you, and you will have to throw yours to defend or attack. Have fun and good luck!

You must practice to become the best online, throw accurately at the many opponents whilst avoiding being hit yourself. Note: When you've thrown the knife you stay without a weapon for a while. You're very vulnerable.

Comment on the game. Assess it by giving star and share it with playmates. Then seek games Sworm.io at http://frivclassic.net/

Use the mouse to throw the knife.