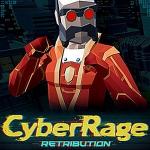 Cyber Rage: Retribution is a fighter game with a special version of 3D side-scrolling layout from the new collection of games from Friv 2019! In this new action-based game, the players can be in charge of controlling a specialized fighter and join in the intense street battles. Bad guys approach in teams as they want to take over the whole place. If you and your teammates can battle your way through the streets while trying to stay alive, it's possible to take the lead and bring the peace back to this street!

The gameplay resembles most other action games'. Bring all the combination of punches, kicks, and special moves that you have to finish off the opponents. There are many different levels, each with its different feature and enemies. Depending on the enemies, you can work in a team and take advantage of the obstacles to gain the upper-hand position in a battle. Maximize the damage range by going to the store and purchase some updates as well!

As it's a highly interactive game at http://frivclassic.net/, the ability to control many actions at the same time is a key point to increase your chance of winning. Should the enemies overwhelm your team, don't hesitate to use the boosters to free yourself. Prepare to emerge in the great graphics with carefully hand-drawn characters for free! Keep an eye out for some other options from the same category such as Inferno Monster Ball Hell Run and Punch Man

Use WASD to move

Q to block the attack

The space bar to jump