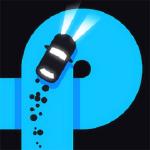 Do you love playing fast-paced racing games where speedy decision making and a lightning-fast reaction time are the keys to success? Join Finger Driver free games at Games of friv and collecting the diamonds and go farther. Keep your car balance and avoid hitting. Much time!

With a bunch of different cars for you to unlock, not too many Ads to interrupt your gameplay and a control system that is simple yet challenging, Finger Driver at friv action games is a slow and easy racing handling game we actually found really fun and enjoyable.

It’s really as simple as using your thumb to steer your car, being careful to keep it on the road and collect any diamonds that appear along the way. Failure to keep your car on the road will result in total failure in which you will be forced to start all over from the beginning.

The car will follow your finger as you drive around bends and avoid obstacles. The ultimate skill based driving game is here to play online. Keep your finger steady as you attempt to drive as far as possible. Although the speed at which your car moves looks sluggish while you’re not in control of the wheel, grab hold of the virtual steering wheel at the center of your screen and you’ll soon realize Finger Driver is a game about handling. Collect coins to use to upgrade the fanciness of your car.

Do you like the game? Share the game with your friends to challenge them. Rate it by giving stars and write your thought in the comment box. Play more girl games like Furious Road at http://frivclassic.net/

Use finger or arrow keys to drive