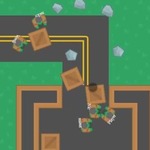 Braains is a competitive zombie survival game filled with fun and surprises! Each server holds up to 50 players and 1 of those players starts as a zombie. But beware, the infection spreads fast as they touch humans, turning them into undead, hungry zombies!

Braains.io is an awesome multiplayer game friv of survival – you start as a human but you can transform into a zombie immediately if you wish and try to turn the other players into a zombie too. If you play as a human you just try and evade the zombie attacks and stay alive for as long as possible. You can hide in a building and use different objects to block the doors and stop the zombies approaching.

This game friv free is a heap of fun and you will have hours of fun either surviving as a human, or trying to eat people’s flesh and turn them as a zombie! What makes this game even more fun is that you can join a game and start playing in a matter of seconds.

Use WASD or arrow keys to move the character.