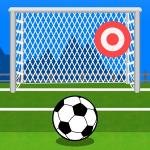 How good you are at aiming and kicking the ball? When it comes to the final seconds of a football game, the title of the winner can depend all on a penalty shot. Make sure that you practice aiming from right now with Foot Shot to be able to goal in a real game later! The players will participate in an international football competition. Utilize your ability to shoot the football in this penalty shot and bring home the victory.

The rule for a penalty shot is that the player has to stand at the exact designated position and carry out the shot. Since this game at http://frivclassic.net/. is a practice game, you will have to repeat it many times. When you manage to score three goals, the difficulty level will increase gradually. The goals change constantly to make sure that you can score no matter where the goalie stands. On harder levels, you might even have to deal with a moving goal which resembles a real goalie.

This game will improve your precise aiming skills and push you to the limit of your talent. The speed and the force of the shot also matter as they decide how far the ball will move. Practice makes perfect so don't be lazy! Bear in mind that for each round, if you miss too many times, the game will be over and you will have to replay it. Prove yourself as the best football player now! Would you like to try out some other sports games such as Peter Paranormal and Slime Road?

Swipe up the mouse cursor to kick the ball.