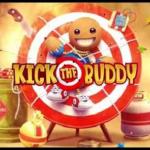 If you are looking for a game to de-stress and unleash your anger, Kick The Buddy is one of the best choices from Friv land! The rules are very simple. The game comes with a doll which is hung on the hook. You can do whatever you want with the doll using the available tools. The collection of weapons includes many types, ranging from a knife, gun, rifle, rocket launcher, or even a tank to run over the hanging doll.

Don't refrain from using any tool because the goal is to release all of your anger on that poor doll! Also, you can be creative and combine many different tools together to maximize the damage range. For each attack, you will be rewarded with gold coins. These coins can be used later in the store. Keep unlocking more and more bombs, ammo to use on the other times. The game can be played over and over again for free at http://frivclassic.net/

Each time you attack it, remember to collect the dropped gold as well. Such a fun game even has a cool design and beautiful graphics to satisfy players of all ages. Despite its simple nature, the gameplay is very addictive and easy to play, so the new players can start the game immediately! Also, if you have some extra coins, you can buy the clothes and accessories to put on the doll and customize it as you wish. Plenty of games like this are updated daily on our websites such as Veggie Slicer and Whack The Laptop.

Interact with the doll and choose the items using the left mouse.