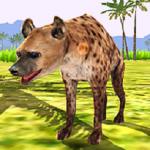 Let's dive into one of the most famous wild animal games from Friv 2019 called Hyena Simulator! With the main theme as the simulation world filled with animals and obstacles found in the wilderness, the players will have to play the role of a wild hyena. Not only will your task include surviving by avoiding the attacks of bigger predators but you will also have to hunt down the smaller animals. This will create a supply for food that can be used to grow.

In the role as one of the most powerful and dangerous animals in the world, there are a lot of movements that your character can perform. One specific characteristic that you should pay extra attention to is that these animals are not just scavengers. They are also hunters that are capable of using their strong jaws to defend themselves.

Take advantage of the speed, sharp teeth and claws wisely to overcome all the challenges and dangers lying around on this map. This special 3D game at http://frivclassic.net/ is designed so that you can keep track of the location and the progress of other players using the small map on the corner of the screen.

Prepare yourself for a new experience with a wide forest and realistic animals, ranging from tigers, hyenas, foxes, and the little breeds as well. Don't forget another important task of stopping humans from destroying the forest! Why don't you try out other cool games such as Island Survival Simulator and Forest Survival Simulator?

Use the mouse to view and attack