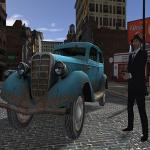 Destroy the other Mafia gang in the stunning retro simulation game from Friv land called Downtown 1930s Mafia. Prepare yourself for the battle taking place downtown where gangs fight for their territories. Each of the gang will distribute its own people to cover the area of their own territories. Then, they will dispatch more human resources to try and take over other places as well. It's up to you and your teammates to protect your own territory while keeping yourself alive in the middle of the bullet fight.

The first thing that you should do is to take a look at the weapon collection of yours. Knowing your resources and its limit will be crucial in this game at http://frivclassic.net/. While you move around, take a shot at any enemy showing up at sight. If you fail to shoot them down, they might notice you later and take a shot first. Whoever shoots first has a better chance of scoring, so do your best!

Don't forget that this game is about more than just shooting. You will find the development of the black market, bank robbery, smuggling, illegal alcohol, and raids as well. Can you survive the harsh reality of this Mafia world? Expand your territory with other action games like Trash Truck Simulator and Speed Brazil

Use WASD to walk or drive

H to use the help panel

R to repair the car

U to reset the car

Enter to join the chat.