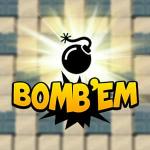 The new Bomberman has returned to Friv free games with a brand new version of Bomb'Em! In this awesome multiplayer version of the iconic game, you will compete in the real-time servers with the smartest players. They can move incredibly fast and think of so many ways to trick you into crashing into their bombs. It will take some wisdom, speed, and extra bonuses to conquer this game!

As you fight for arena domination, the task is to move around each map and place bombs on the ground to destroy blocks. When you successfully blow up a block, there might be a booster hidden inside it. These bombs can be used to open up the new paths as well! You need to place the bombs in the most dangerous places to the enemies to increase the chance of them being hit. Just be careful not to blow yourself up.

If you can't run away from your own bomb in time, you could end up hurting yourself in the process! The best players here at http://frivclassic.net/ will be the one who can outwit all other opponents. The power-ups will be extremely handful since they can give you increased damage range and blast radius for example.

Individual scores are kept, but if you can coordinate with your team, the result will be even better! Experience the run to place bombs in this simple and fast-paced gameplay for free now! There are plenty of other fun choices for kids on our website such as Bouncy Run and Golf Royable

Use WASD or arrow keys to move the character

Space bar to place a bomb.