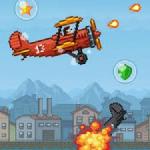 Air Wolves is an online shooting game which allows you to play on friv funny games for free. This HTML game is playable in not only browsers (chrome, safari) but also smart devices (Samsung, Android devices, iPad, iPhone, Window phones). It tests your shooting and reflexion skills.

You will take the control of a red jet. You are alone but your enemy is very crowded. They come from the opposite direction. You attack them by shooting constantly at them. Your plane is shooting automatically and you just need to balance it and help it move up and down. As you shoot at your opponents, they land immediately and will be destroyed. When you eliminate an aircraft, you gain 50 coins. Besides, you need to avoid their bullets because you also fall down and lose the game in friv amazing games.

Your enemies appear one by one, so it’s not difficult for you to knock them down. In addition to this, you need to collect all the stars which are suspended on the sky to earn points and you receive 10 points for each time you touch one star. Furthermore, there are many useful items which you should pick up such as the shields which can protect you from the bullets in many seconds. Try your best to go as far as you can in the game to break your own record.

If you find this game interesting, why don’t you rate it highly and leave your comments for us? Explore more games such as Tank Defender and Alien Sky Invasion at http://frivclassic.net/. Remember to share the game with your friends to have fun!