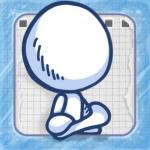 Sketchman Gun is the fast-paced arcade game which is playable on friv running games for free. This game is the perfect combination of racing and fighting game. It is your duty to run as far as possible as well as avoid being destroyed by many harmful objects and the bad creatures in front of you.

Your character is running automatically and you just need to lead him to jump higher to dodge the impediments. Your obstacles are the wooden boxes, the nail plates, and even the flying creatures or the guys which have weapons like gun or knife. Jump to avoid the bullets and the standing people or you are armed with only a gun, you can shoot at them to kill them in friv best games. You must keep moving forward whilst shooting and jumping over objects that are in your way.

Don’t forget to collect as many gold coins on the way as possible. As you progress, the level will continue to become more and more difficult and even more frantic, thus, you must try to survive as long as possible.

You can see a bar on the bottom of the screen. After each time you are attacked, this bar decreases a little bit. When it runs out, you die. You can upgrade your arsenal by using coins you collect in each attempt. Keep trying and practicing to smash your high score and let nothing stop.

We are so thankful if you rate the game 5 stars and leave your comments to encourage us. Share the game with your friends to have fun and explore more games like Stickman Army Team Battle at http://frivclassic.net/.