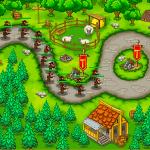 Will your kingdom stand the attack waves of the enemies from Friv land? In Kingdom Tower Defense, your best skills in arranging the defensive layer for your own kingdom will be put to test. This is a normal tower defense arcade game that takes the setting of the middle ages with pixelated graphics and carefully designed layout.

Each player will play his or her role as a castle commander in this magic world at http://frivclassic.net/. The main task is to keep your territory safe by building different kinds of defense towers and buildings. These towers will be placed on the outer layer of the kingdom, therefore, it's crucial that you think of a good formation to put them. Enemies attack in waves and they will use their power to keep pushing more after each turn.

In order to survive, you need to optimize your damage range by focusing on upgrading the old towers. The strong defensive lines also come from purchasing the new genre of towers and the good archery soldiers using your earned currency in the game. How can you be a top player in this game?

Use your strategy properly and change it depending on the situation and number of enemies wisely. Also, keep track of your soldier numbers to fill in the blank spot. With your ability, we believe that you can have fun with some more games like Viking Warfare and Et Game later!