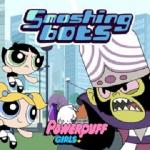 Mojo has come back and he is trying to take over Townsville again! The mayor contacted the Justice Powerpuff Girls to ask for their help on this difficult task of saving the city. Will you join the girls in Powerpuff Girls Smashing Bots, a new action game from Friv land?

The main goal is to defeat the evil Mojo monkey using the power of three girls. You can control the movement of them while flying, which includes the flying direction, the main character, and the speed. While protecting the city from the exploding bombs that Mojo dropped, they also need to rescue the abducted citizens. Since the game requires the ability to multitask, keep focus and carry out all these tasks using your technique. If you have tried other action games from http://frivclassic.net/, this will not be a problem for you.

While flying, keep checking to see who is the main character. If you shoot, the power of the main character at that time will be utilized. The girls have different power, so use each of them properly and wisely to win the game. Your score will be recorded and shown on the top of the screen. Try your best to maximize the damage to Mojo and gain more scores! Should you love this genre of game, don't miss out on the chance to play some more for free with Tiny Rifles and Terminus.

Use the mouse cursor to navigate the girls and to aim at the evil Mojo.