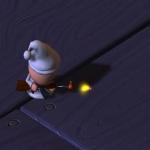 Endless Survival Shooting will bring out the inner shooter in you as the only way to survive this intense game is to keep shooting! If you dream of becoming one of the best players in Friv land, it's time to take your shot with this new game. Prepare to emerge in a third-person shooting game that comes with such a realistic design that attracts players from all around the world.

Moreover, it's also an endless survival game with many unique features to make the game more enjoyable and bring a thrilling sensation. Look out for one of the best game art animations for a shooting game available without a cost! It's your task to survive as long as you can while shooting down the monsters and the opponents. It's not going to be easy due to the large herd of monsters that keep on approaching you one by one. Do your best to aim, take the shot and move on to the next target without missing a single one!

The players with the most precise shots shall have a higher chance of making it out alive in this game at http://frivclassic.net/. Don't forget to check the final scores and see whether you make it into the Leaderboard worldwide or not! If this genre is your favorite, check out plenty of other good games for kids such as Caveman Adventures and Stickman Skate 360 Epic City

use WASD keys to move, aim and shoot with the mouse cursor.