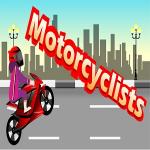 Practicing your driving skills on the latest models of motorcycles in EG Motorcyclists, a casual game from Friv games 2019. The basic rule of the game involves moving among 3 lines while proving yourself as a skilled motorcyclist. Not only will you have to keep the balance of the bike but you also need to pay attention to the scattered objects showing up on the path.

Since they show up randomly, the players are required to stay focus from the moment they start the quest. Keep riding on your line without hitting other motorcyclists, but should there be holes and spikes, you will have to switch the lanes immediately. The pace of the motorbike can't be controlled, however, you can control the position of it with the up or down movement.

There is no time limit, but only 3 chances are given to you to survive on the tough track. You can adjust your bike's position by holding the up or down button to make it move. Also, the speed of your motorcycle is an in-game embedded feature as it is increased gradually to pose more threats. Estimating the speed will be helpful as you progress further.

Of course, the main goal is to reach the highest scores possible as shown on the Leaderboard at http://frivclassic.net/. Drifting and switching lanes at the right timing will guarantee your good performance. Keep riding on cars, boats, bikes and other types of vehicles in other games such as Derby Crash and Clean Road

Use the mouse to move the bike.