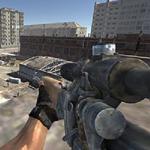 Dead Zone Sniper free game has just been added to the Friv action collection. Let's check it out! Since it's a first-person shooting game, you will experience a battle from the viewpoint of a sniper. However, you are on your own in the middle of a ruined city, and your task is to find out the locations of all the other assassins. When you locate them, use your shooting skills to knock them down.

Be careful to avoid being discovered because it will make you a target. Choosing your base is also a crucial step. If you choose to stand on a rooftop, you can withstand as long as you can be armed with a powerful sniper rifle. Will you be able to overcome all the attack waves? After you have passed a level, your health bar and ammo will refill, so don’t worry if you have taken a few hits or wasted all your ammunition.

During the most extreme situations, the best players will be revealed! Not only does this game at http://frivclassic.net/ have a cool gameplay but it also captured the realistic background of a ruined city. More shooting games such as Ghost City and Motor Wars 2 are also great choices. Come and play now!

Use arrows or WASD to move, Mouse to aim and shoot, C to crouch, Space to jump, Shift to sprint.