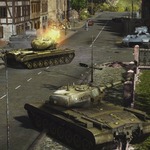 Tank Off is a realistic and exciting multiplayer tank game that you can play for free on y8 action games. With the realistic graphics and blast effects, the game will bring you the real feelings of the soldier with a lofty aim of eliminate all the enemies.

First of all, named your character and choose a room to enter. There are 6 people in each room. After that, set up your tank, you are prepared 500 dollars to create your vehicles with the different speed, gun damage, gun recharge, shield, shield recharge, turbo, and turbo recharge. Besides, the game contains a variety of tanks with the different strengths but you just can unlock them by completing a certain number of levels in y8 games online.

Choose one of two team and start fighting. Move around the map and find your opponents. They are going in many areas of the map, shoot constantly at them to kill them faster. Try to attack them before they have a chance to slay you.

You must try your best to steal the enemy flag without being destroyed and return it to your base. Besides, you must also defend your own base and stop the enemies from stealing it!

Act fast to kill as many enemies as you can but watch out in order not to shoot your teammate. Be clever to lead your team to the victory.

Rate the game highly and leave your feedback to encourage us. Invite your friends to take part in the battle and kill the enemies together. Follow us for more games like Tank Wars and Sharkosaur Attack at http://frivclassic.net/.

Use WASD or arrow keys to drive the tank, left click to shoot, shift to use turbo, M to mute audio, Enter to chat and Esc to open menu.