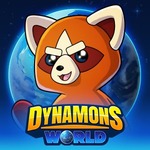 Dynamons World is an addicting, action adventure game friv that puts you in the role of Dynamons master! Catch and collect dozens of Dynamons and train them to become stronger, more resilient! Show off your awesome might as you battle through multiple stages, catching other species of Dynamon and following an epic adventure in an unforgettable expansive universe filled with the mysteries of the awe-inspiring Dynamons! Will you be able to collect them all and reach the end of your journey?

Join the adventure and discover the amazing Dynamons World, loved by millions of players!
Catch and train the greatest team of Dynamons and challenge your friends in real-time multiplayer PvP battles. Explore an open world searching for the rarest and strongest monsters, fight tough Captains and prove your skills to become THE BEST!
★ Get ready for the ultimate Dynamons Experience! ★

You may also like: Hatchimal Eggs Online and Running Ninja

GAME FEATURES
✓ Online Battle Arena - Battle your friends and players worldwide in PvP multiplayer battles!
✓ Catch and train dozens of unique Dynamons!
✓ Unleash powerful skills and brilliant tactics to defeat even the strongest rivals!
✓ Travel all the way from Dynamons Camp to the Temple Ruins in an addictive and immersive story!

Dynamons World is being updated all the time with even more new Dynamons, quests, battles and MORE!

Have a great time at http://frivclassic.net/

Use left mouse button to play.